The following is reposted from The Low Press.

In a small corner of the internet, a special group of wiffle nerds are constantly scanning for obscure wood and plastic bats of years past. This subculture of vintage wiffle bat collecting has exploded in recent years to at least 10-12 people. Unfortunately the documentation concerning these bats has not kept up with this explosion. As part of Wifftober week, the LowPress visited uber wiffle nerd The Black Cloud to take an indepth look at his collection. During this visit, we also reviewed the most recent 100 sales of vintage bats on the internet. As with every investigative piece on the the LowPress, the research was done quickly and with little regard for perfection.

The seasoned collector will quickly notice that our list of ten vintage bats differs from any of the previous articles. In particular, the wood bat is split into three versions and the black bat is split into two versions. Each bat is presented with four pieces of information - market price, availability (% of 100 bats reviewed), distinctive attributes, and overall rarity ranking. The rarity rating ranks the bats 1-10 (1 rarest) and is based solely on our subjective view on each bat. The bats are presented in chronological order. All photos are from the Black Cloud’s collection. Please feel free to contact Hugh at hugh.s.wifflerton@lowballwiffle.org with any questions or further information on vintage wiffle bats.

Note: contrary to many sellers on ebay, the LowPress does not consider the bubble letter Gen 4 plastic bat to be vintage at this time. 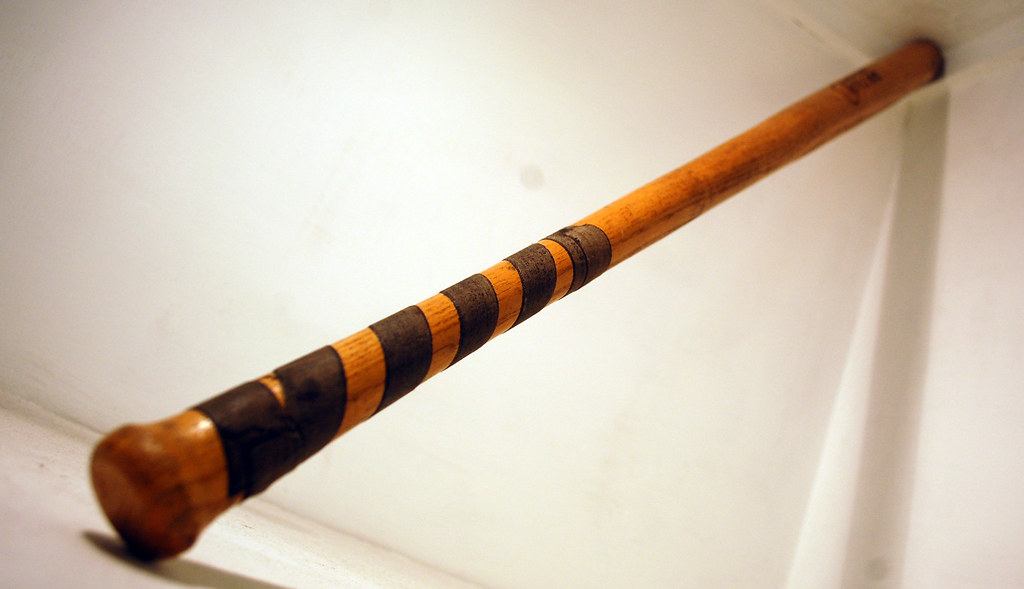 Overview: This is the bat that turns a casual person into a collector. Once a person has the basic wooden wiffle bat, the next goal is almost always the Wiffle King. The working assumption is that this is one of the rarest wiffle bats, but in actuality quite a few show up on Ebay. Many of these are in pretty rough shape. The pieces that make this bat higher value are if the tape is intact, the Wiffle King stamp is clean, and the barrel has limited damage from rock hitting. 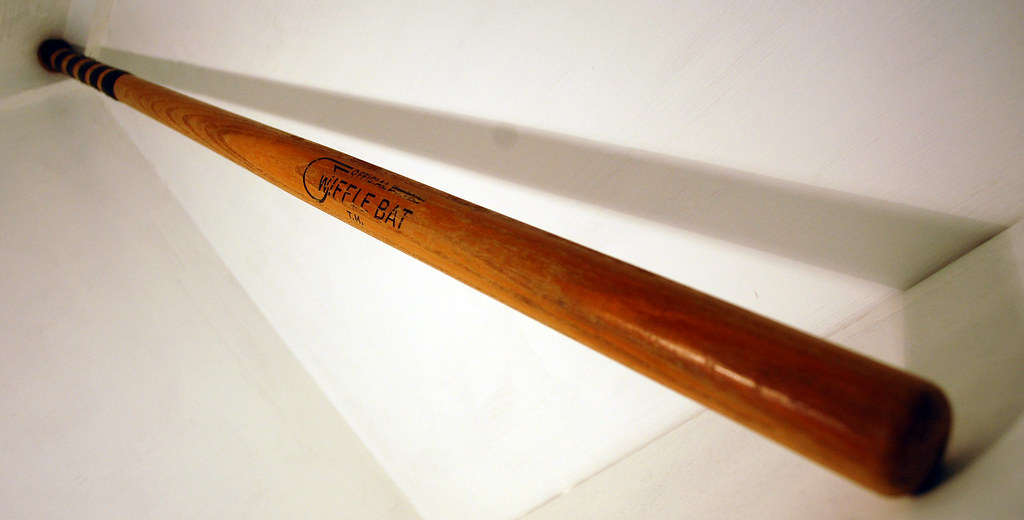 Overview: In all previous Wiffle Bat overviews, the wooden wiffle bat has been lumped into one group from 1955-1972. However for the collector there are three versions based on the trademark stamp. We are not completely sure the timing of the three, but we do know that the first registration for the trademark was on April 9, 1957.

These are fairly common on the market and have the same value determiners as the Wiffle King. The one thing to keep an eye is the heat stamp. It is closer in size and depth to the King than it is to the other two wooden bats. The Cloud does not have this version but you can see the stamping here, taken from a recent Ebay auction.

Overview: This is the gateway bat. It goes like this, at some point a person is amazed to learn that there were wood wiffle bats and even more amazed to find out that there is one available on Ebay. You will see some fluctuation in pricing because if the person does no research they are liable to assume the bat is rare and pay accordingly.

Overview: Of the three versions of the wooden wiffle bat, this is the toughest to find. That said it does show from time to time and can be had for a decent price. Cloud is also missing this version but we have secured another photo that you can see here. 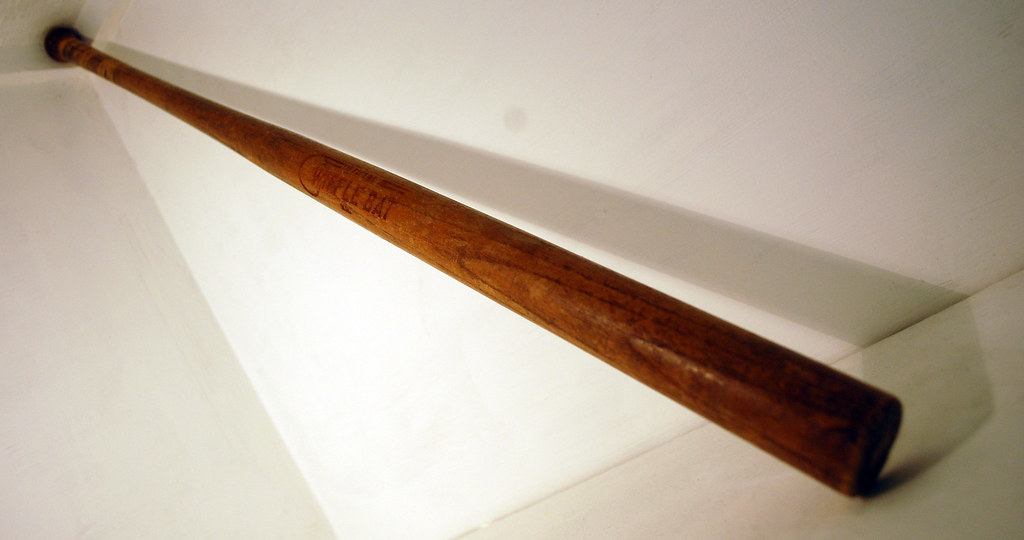 Overview: This bat is for the nerdiest of the nerds. It is by far the hardest to find and most satisfying to obtain. Of the 100 bats we looked at, not one was identified as the Yugo. The story goes that in the late fifties a company in Yugoslavia created 8,000 knock off wooden bats. They were confiscated by Wiffle upon entering the US in Philly. Wiffle later sold the bats under the Wiffle name.

What makes this bat so fun to get is that the seller generally has no clue they are selling the rarest wiffle bat in the world. The buyer must determine the bat to be the Yugo through the crappy Ebay photos. In addition, prior to this article there was no definitive way to tell the differences. 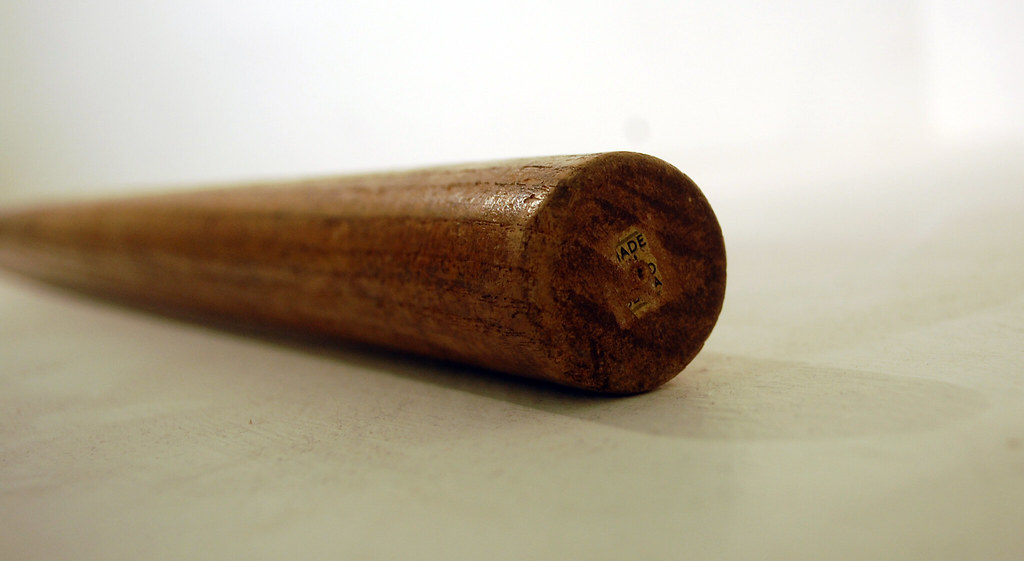 There are four key places that determine the authenticity of the fake bat - the knob will be mushroomed with a flat end, the heat stamp will be slightly blockier than that of the first wooden bat and will be slightly red, the end of the barrel with have a flatter end, and finally there will be a small square Made in Yugoslavia sticker on the end of the barrel. In other articles, it has been claimed that the handle will not have tape. The two authenticated Yugo bats that the LowPress investigated either had taped handles or had evidence of tape.

Since these bats are never actually sold as a Yugoslavian bat, it is impossible to determine market value. Our feeling is that a mint bat would be $250-$300, a good condition bat with a portion of the sticker would be $200, and a beater $100. We recently heard of a savvy collector purchasing a Yugo for $8 at an antique store. 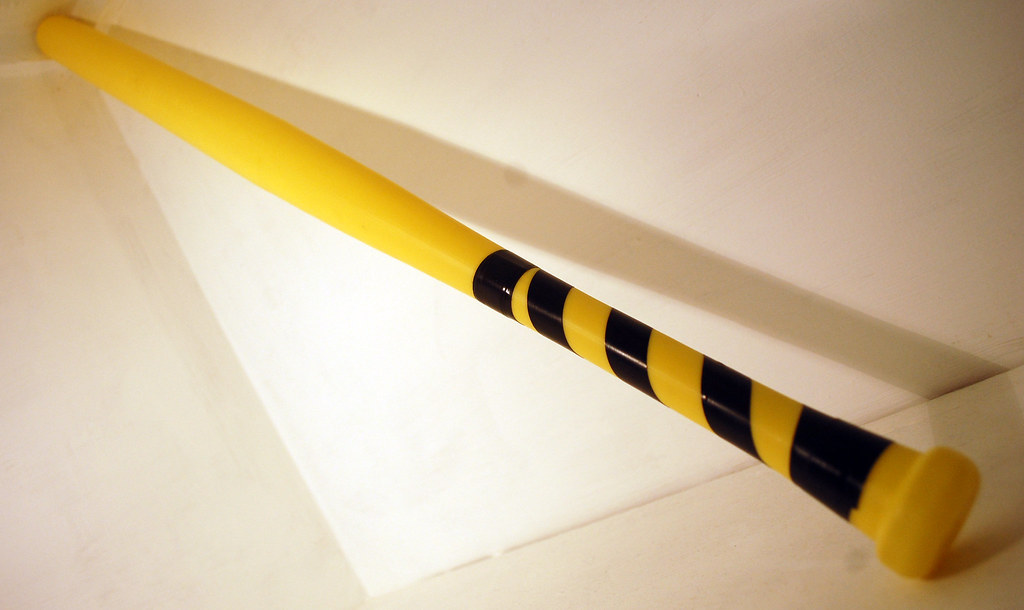 Overview: Pretty much anyone will think the wooden bats are cool because the general public is not aware of their existence. When you move into the nuance of the three yellow bats, you are taking the step into true wiffle geekdom. Getting this bat in mint condition is near impossible. They only show up when someone finds surplus from an old hardware store. The thickness and consistency of the plastic varies dramatically due to the variance in manufacturing through the shift. Market value is pretty high, however there are times with an uninformed seller puts one up without realizing they are selling a 50 year old bat. One of the Black Cloud’s game bats is a Gen 1 that was acquired for under $20 from an uninformed seller. Photos of the Red Dawn are included at the conclusion of this article. 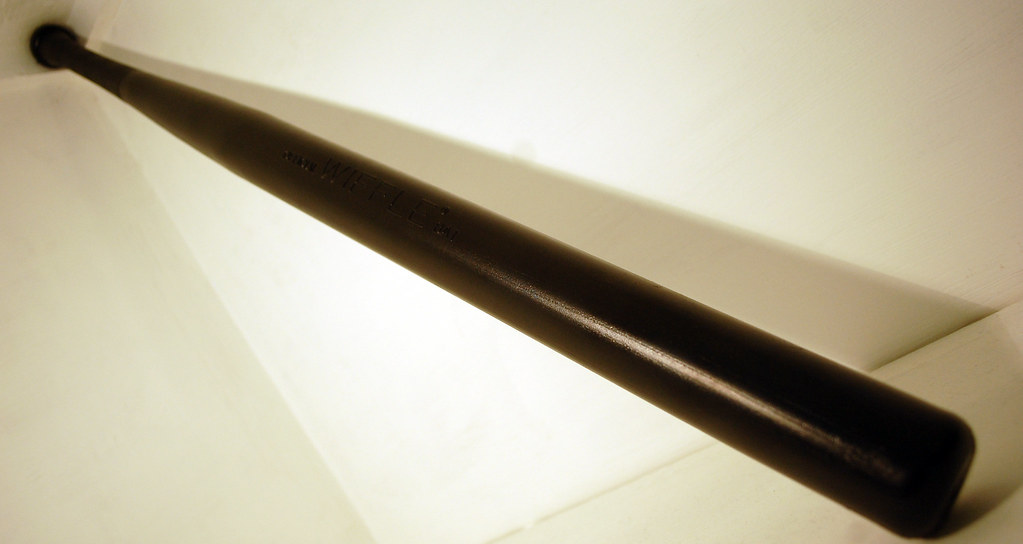 Overview: The black bat was only made for one year during the oil embargo of 1975 due to the low availability of plastic. It is the bat that every serious collector wants. It is generally assumed that the black bat does not show up very often, however those that monitor Ebay will see a few pop up every year. Far more often than the Gen 1 yellow bat. The original quality of these bats was very suspect due to the compromised plastic formulation. As a result finding a black bat in mint condition is very difficult. Like the Gen 1 yellow bat, they really only show up when someone find surplus in their attic.

Overview: all previous wiffle bat history articles stated that the black bat only came with a smooth handle. Last year a lot of 6 mint black bats came up on Ebay and these bats had the rough handle. The LowPress has examined both versions and can confirm the existence of each. The rarity and market value of the rough handle bat is difficult to determine as it had not previously been identified as existing. From our investigation, we feel it is rarer than the smooth handle and would expect the value to climb to around $150 for a mint bat. 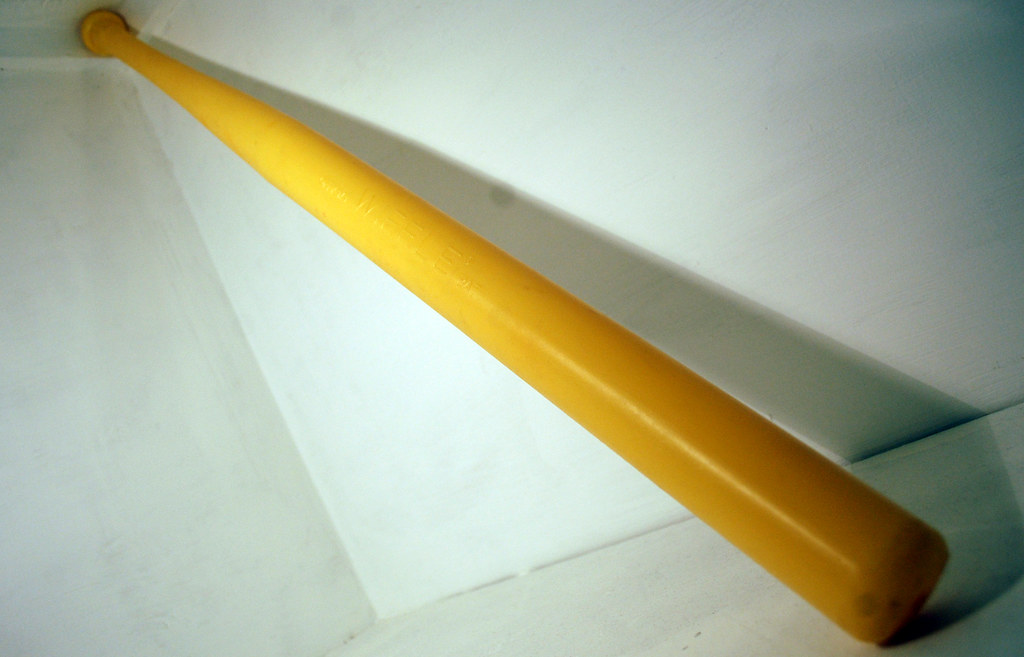 Overview: this is a tricky bat to rate. Our investigation did not turn up many in the 100 bats looked at, however we know that at least one collector has had very good luck acquiring the bat at low prices. We feel the market value has traditionally been driven more by it being a newer bat relative to the others than by its actual availability. As such, it is recommended that you snatch up any that you see in good condition. Another angle on this bat is that it is recent enough to show up in active duty in someone’s garage or at a yard sale or perhaps at an elementary school. A sneaky collector can easily switch a contemporary bubble letter bat Indiana Jones style and the original owner will be none the wiser. The LowPress does not condone such behavior. 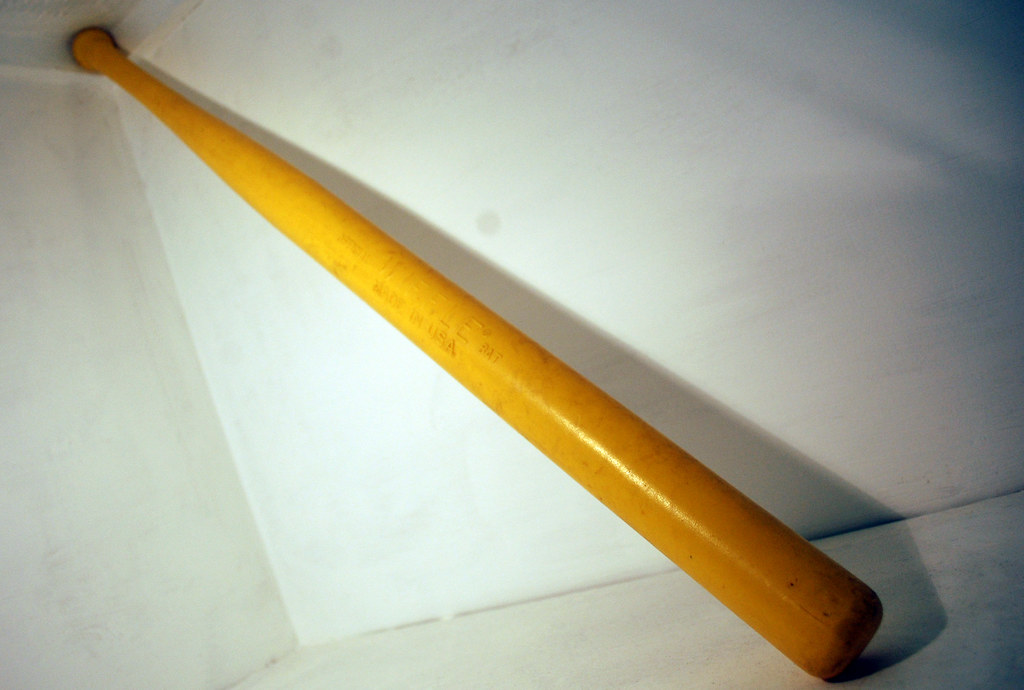 Overview: If you grew up in the 80s, you likely have one of these bats sitting in your parents garage. The Black Cloud pulled two out of his childhood garage. Despite our availability rating, this bat does show up fairly often on Ebay. In addition, these bats are commonly acquired at yard sales or by looking in your friend’s garage. The bats are noticeably stronger than contemporary bubble letter bats and as a result are often used in leagues that require yellow bats. Wowwhiffleball.com did a pretty extensive investigation to determine how much of a difference the generation of a bat made and did conclude the older bats hit slightly farther. What the LowBall league has found is that an older bat maintains its ability to hit farther for much longer than the flimsy new bats. In addition, the sweet spot for hitting it much greater than that of a contemporary bat. Black Cloud is now using a Gen 1 bat for competition, possibly the only Gen 1 bat in active use, and reports that there is a noticeable difference in how the ball comes off of the bat. 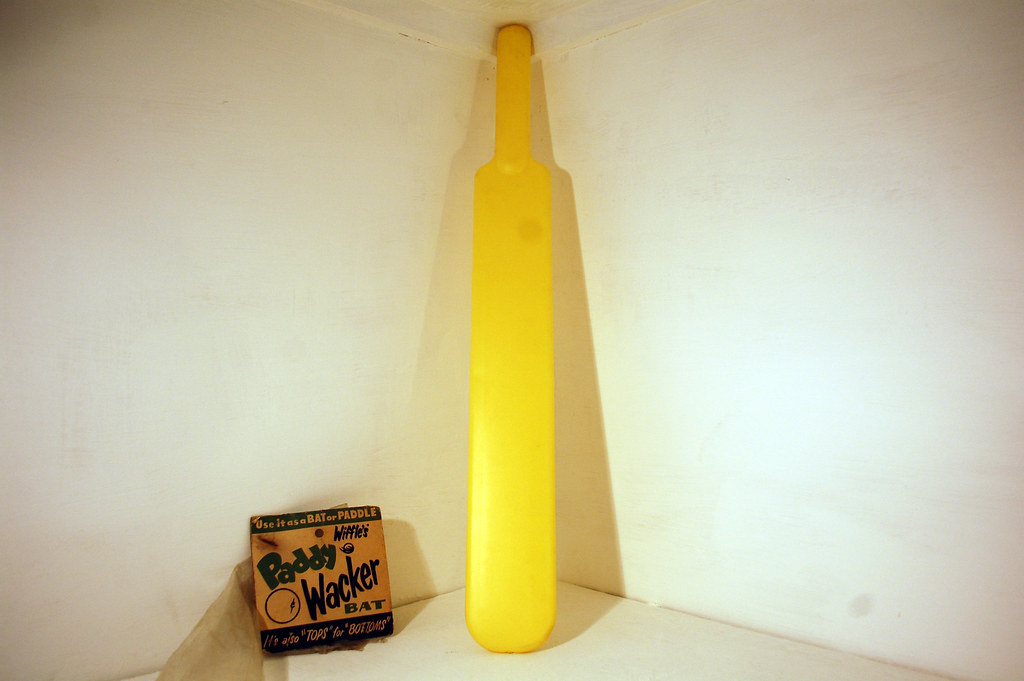 Overview: The Paddy Wacker is a yellow plastic cricket bat and was produced in a time when it was acceptable to print “It’s also TOPS for BOTTOMS”. It is debatable if it should be included as part of a full collection as it is not technically a wiffle bat. However, it is very very rare and is what a collector will go to to get their fix once all the above bats have been acquired. 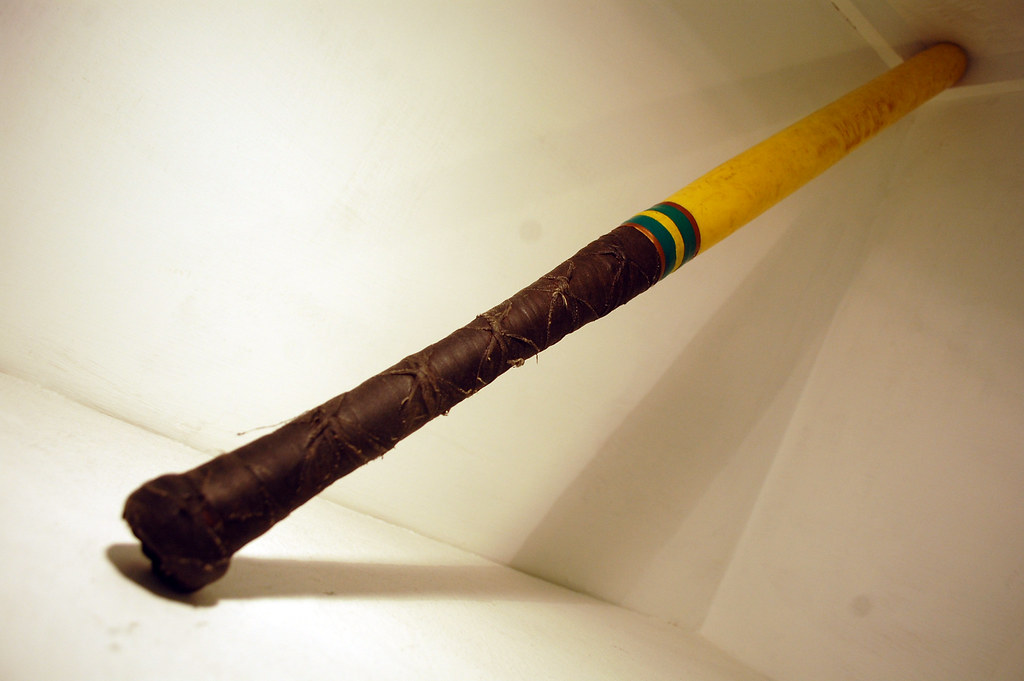 The Cloud has owned this bat for over 25 years and it still gets regular use. It was the first Gen 3 bat to be used in LowBall and ushered in a new era in bats. Today it is very uncommon to see any LowBaller swing a contemporary bubble letter bat. The Peacemaker had many grip versions before landing on its famous katana sword wrap. Many of these previous grips sit beneath today’s grip, giving the bat a more substantial handle than most. The bat has an almost supernatural ability to survive destructive tantrums by LowBallers. 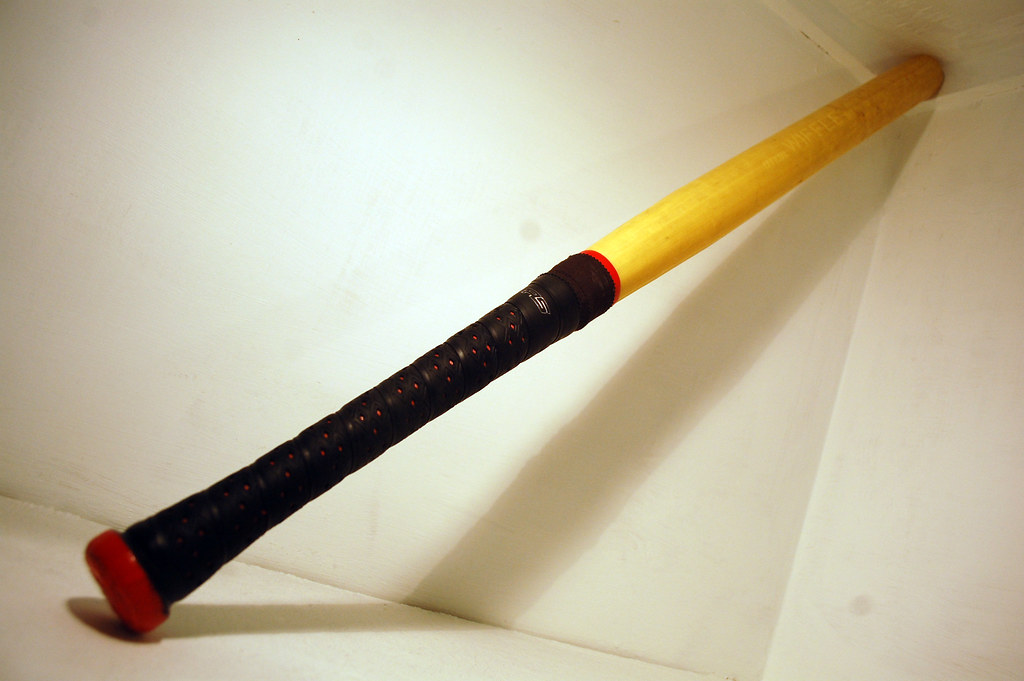 The Red Dawn was introduced at Wiffsolstice of this year. For the first few games it sported the original black electrical tape grip. The bat is significantly heavier than a standard bat and much harder. The current grip is an Easton VRS wrap over some electrical tape to increase the size.

EXCURSIONS Journey To Health is your source for everything Wiffle® Ball!

See all of our Wiffle® Ball Equipment